Novelty postcards have always been among my favorite because of the added work that is require for every type. Novelty postcards include Hold to Lights, Button face, fabric applied, paper applied, mechanicals, feathers applied, honeycomb, embroidery, gate cards and more.

The Button face postcards are not common, but the most common ones seen are designed by George Jervis in 1909. They are called the button face family which includes the following: Miss Beatrice Button, Mr. Bertie Button, Miss Betty Button, Mr Bouncing Button, Mr. Bawling Button, The Buttons Buttons, Bhut Con (laundry man) and I are sure there are more

Many of these postcards are hand made by the sender. One is marked Husband and signed Mitzi which was done in 1949. While this card is newer, it is my favorite. For the old time collectors and dealers, it was done by Mitzi Bassett who was a famed dealer collector in Los Angles, California. Both are gone now but I think of them both when I see my card.

Often the button face postcards have great rhymes as the greeting such as: They was a young Lady named Mabel. One evening danced on the Table. She blushed very red When a gentleman said- Look at the legs on the table or There was a young man named Horattus Who lived in an attic quite spacious, When he went to a dance He always wore pants, But up in the attic My Gracious! And Mary sat upon a pin, but showed no perturbation. Some of her was genuine, but most was imitation.

Whether the postcard related to Afro-Americans, Native Americans or Hindu, they were often derogatory, like The poor benighted Hindu, He does the best he Kindo, He sticks to his caste, From the first to the last, but for Trousers he makes his skindo.

The sport of baseball is of a Chicago Cubs player with the message, As we boldly advance, They haven't a CHANCE. All there are dubs, For we are the CUBS! During this winning era for the Cubs the three best players were Tinkers, CHANCE and Evers, which was Shortstop, Second Base, First Base.

Very few holiday button face exist, but one while saying Thanksgiving, shows a carved Halloween like Jack-O-Lantern, so how could I resist that? I have only found one that is an animal and that is a dog.

The buttons have painted faces which are either sewn on between the eyes like a normal button or glued on. The buttons must have been able to be purchased painted because too many of mine are the same face by many different publishers or even hand made. 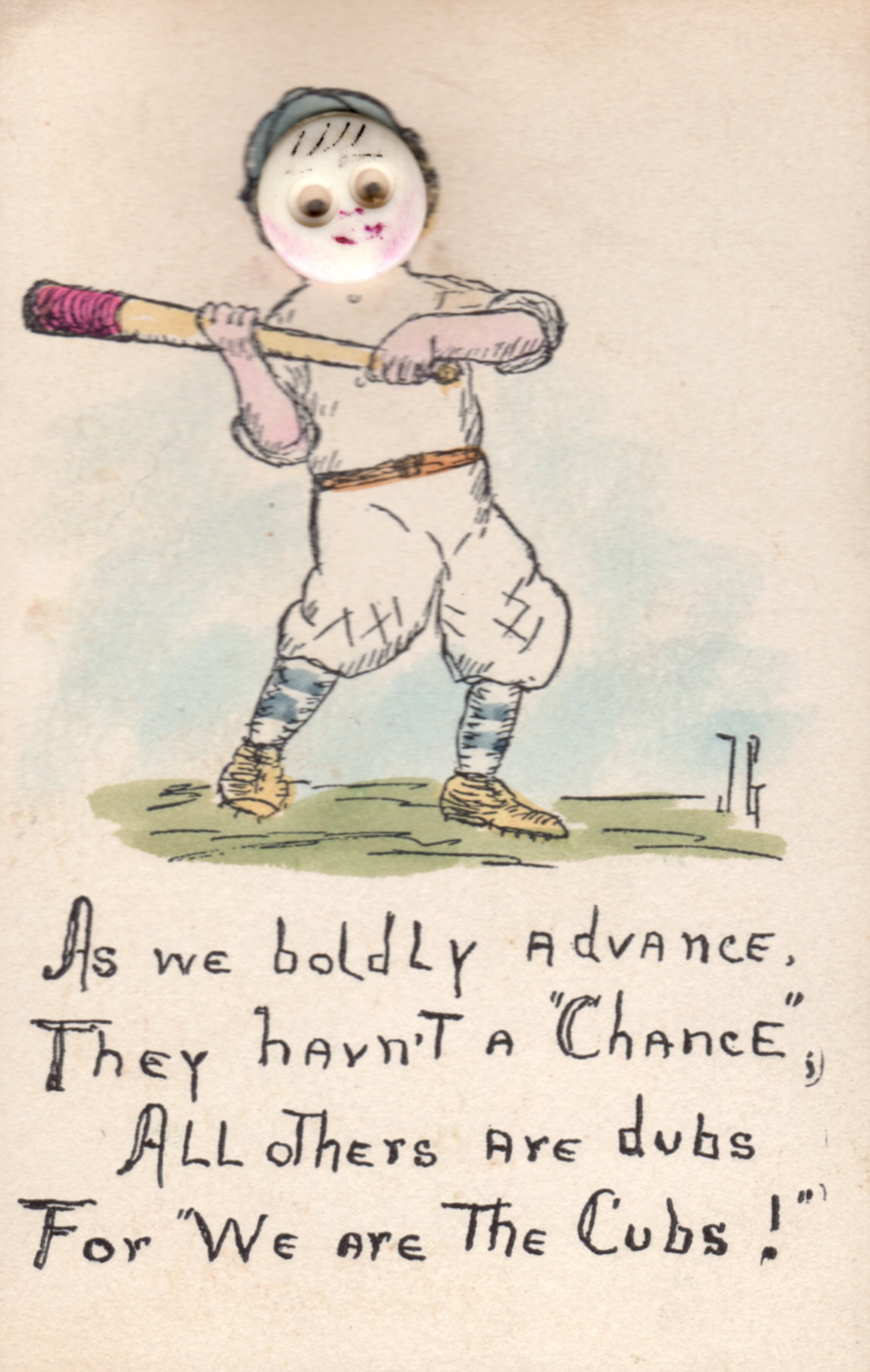 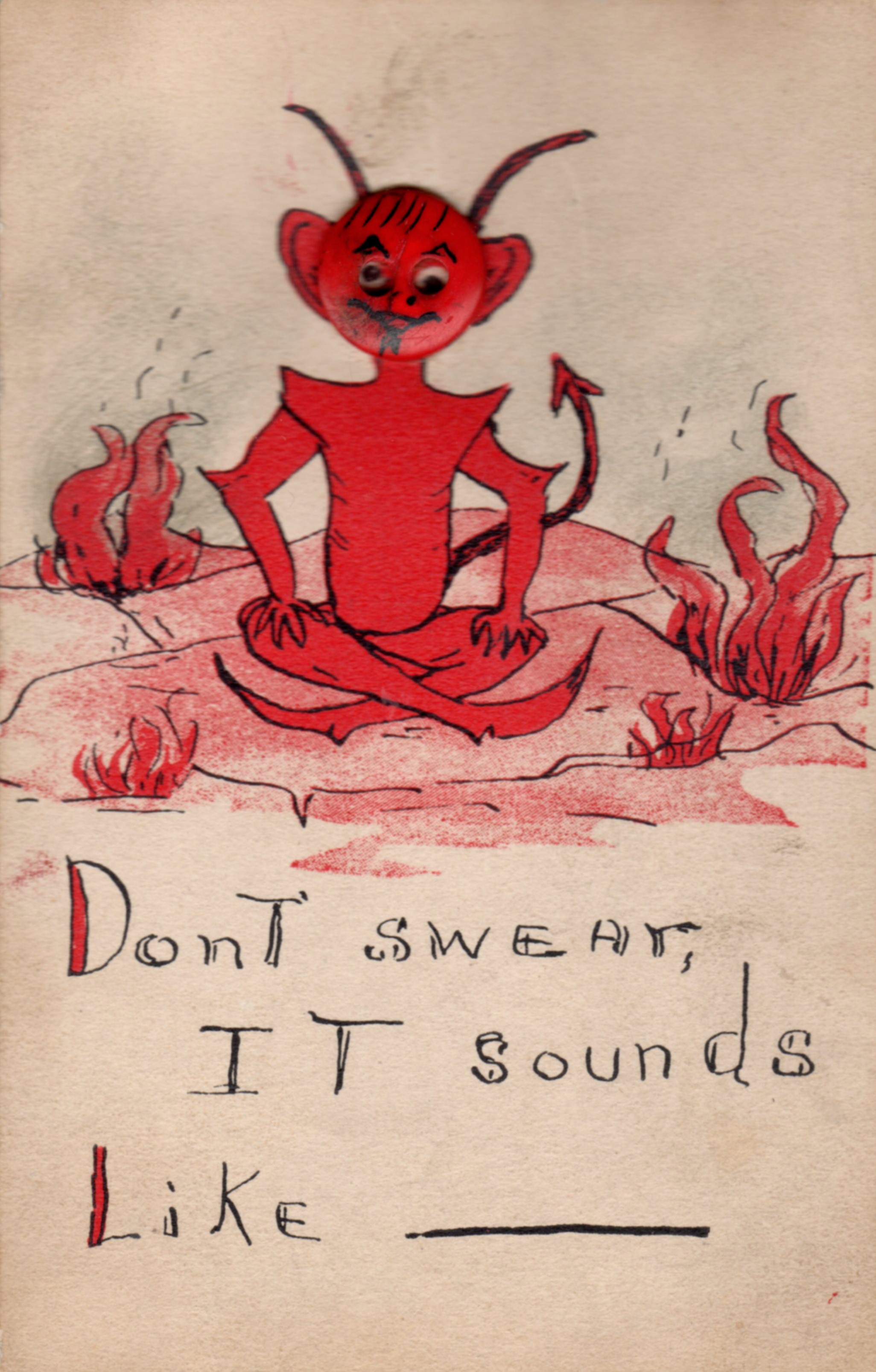 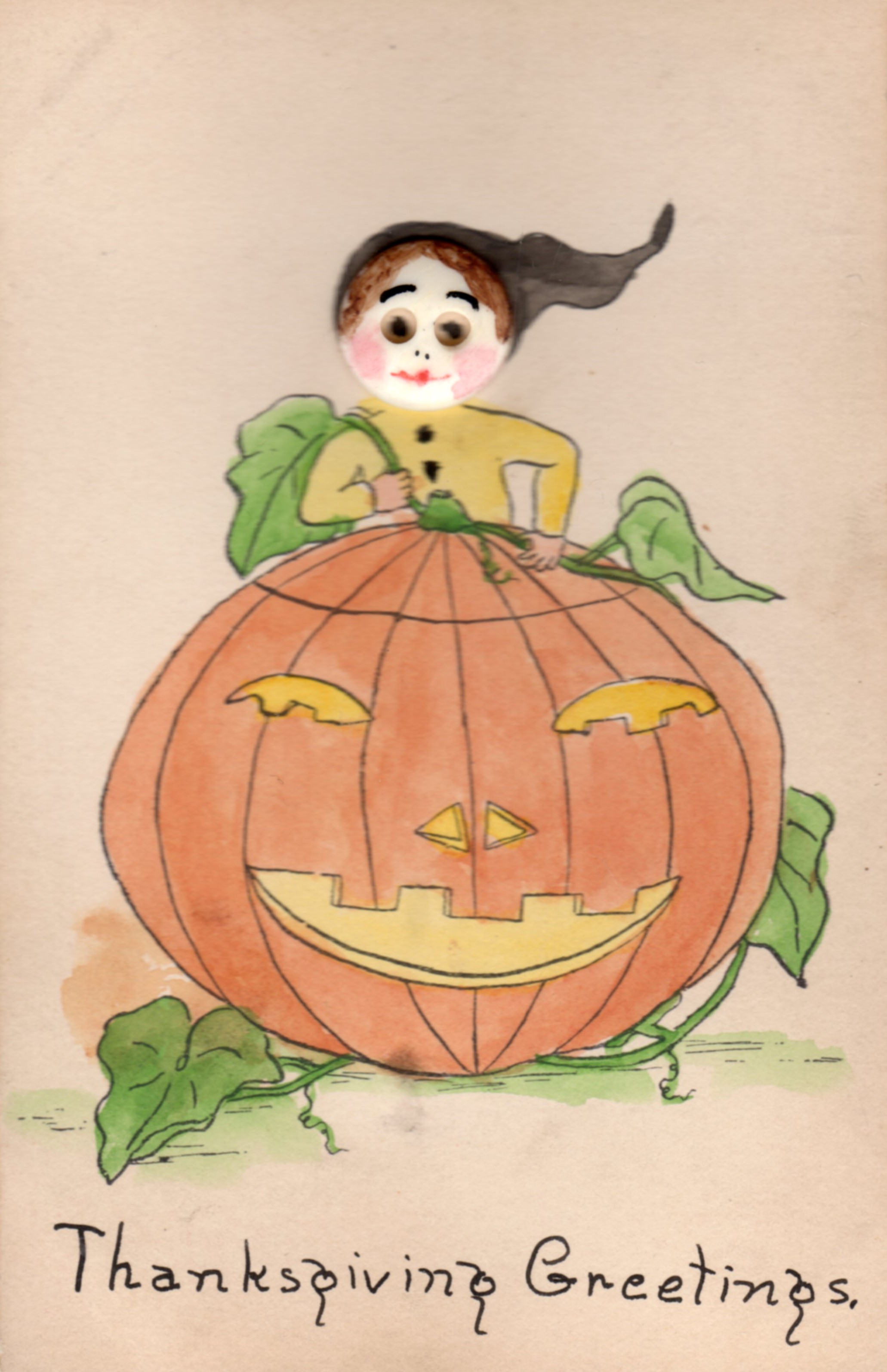 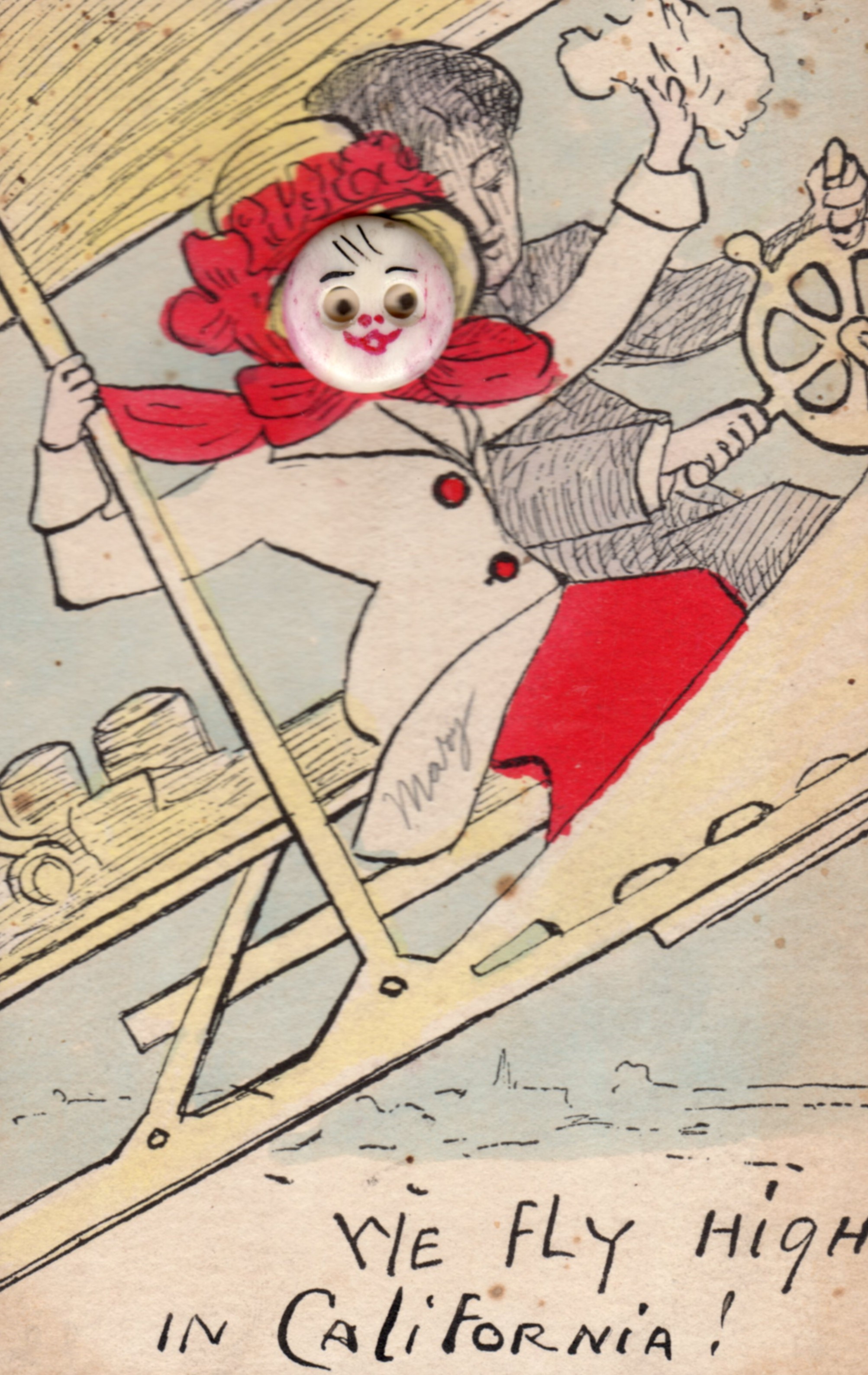 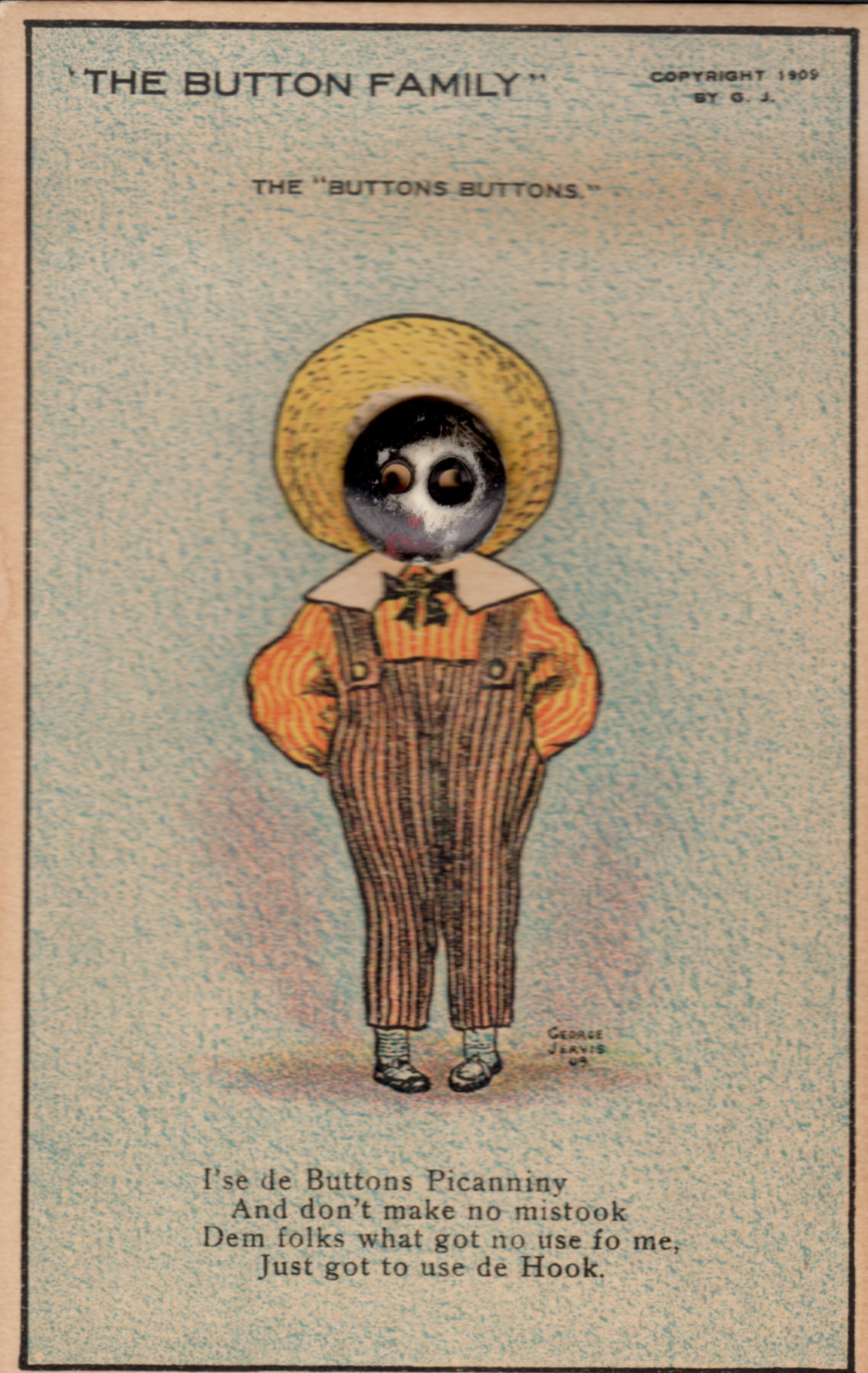 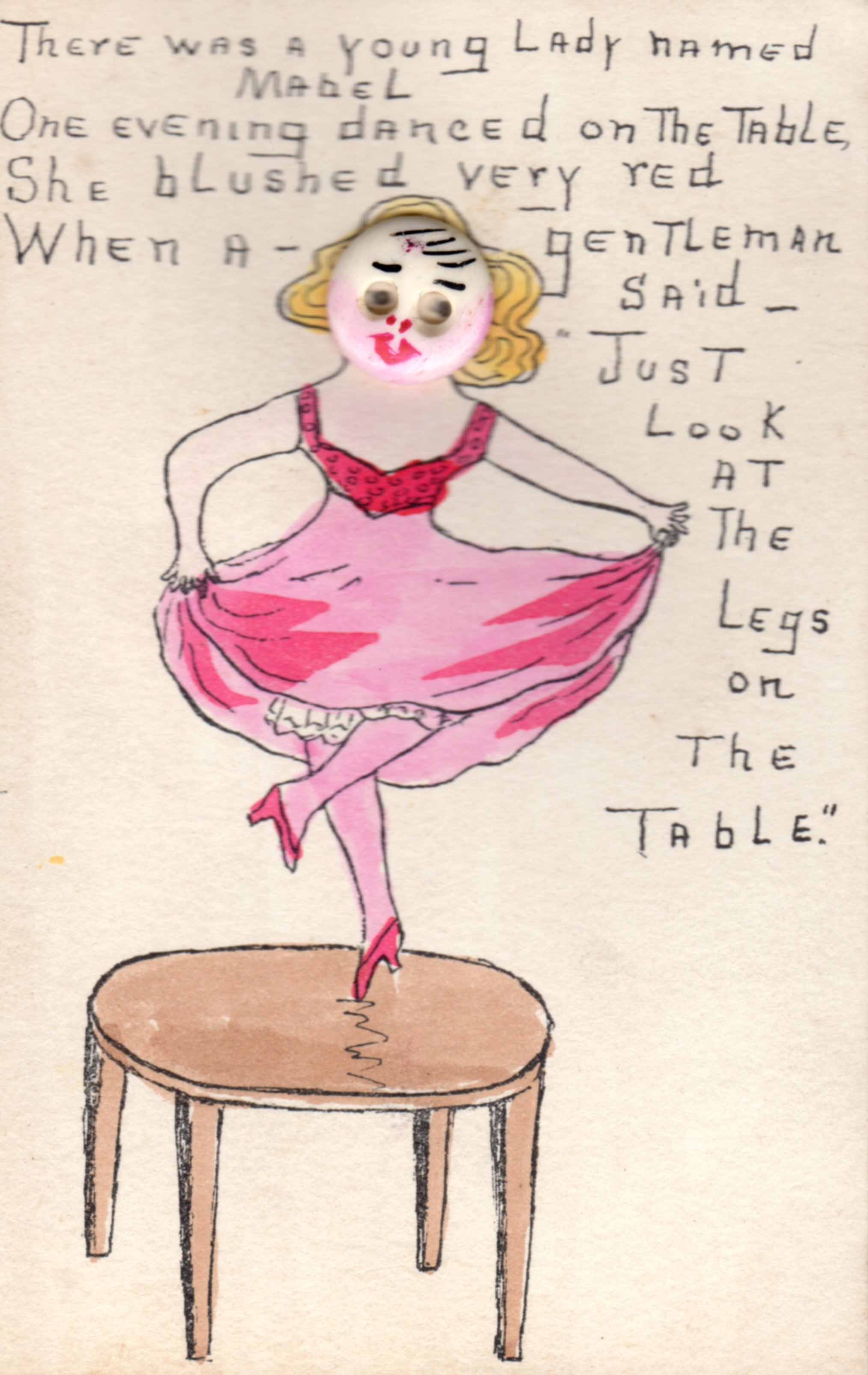 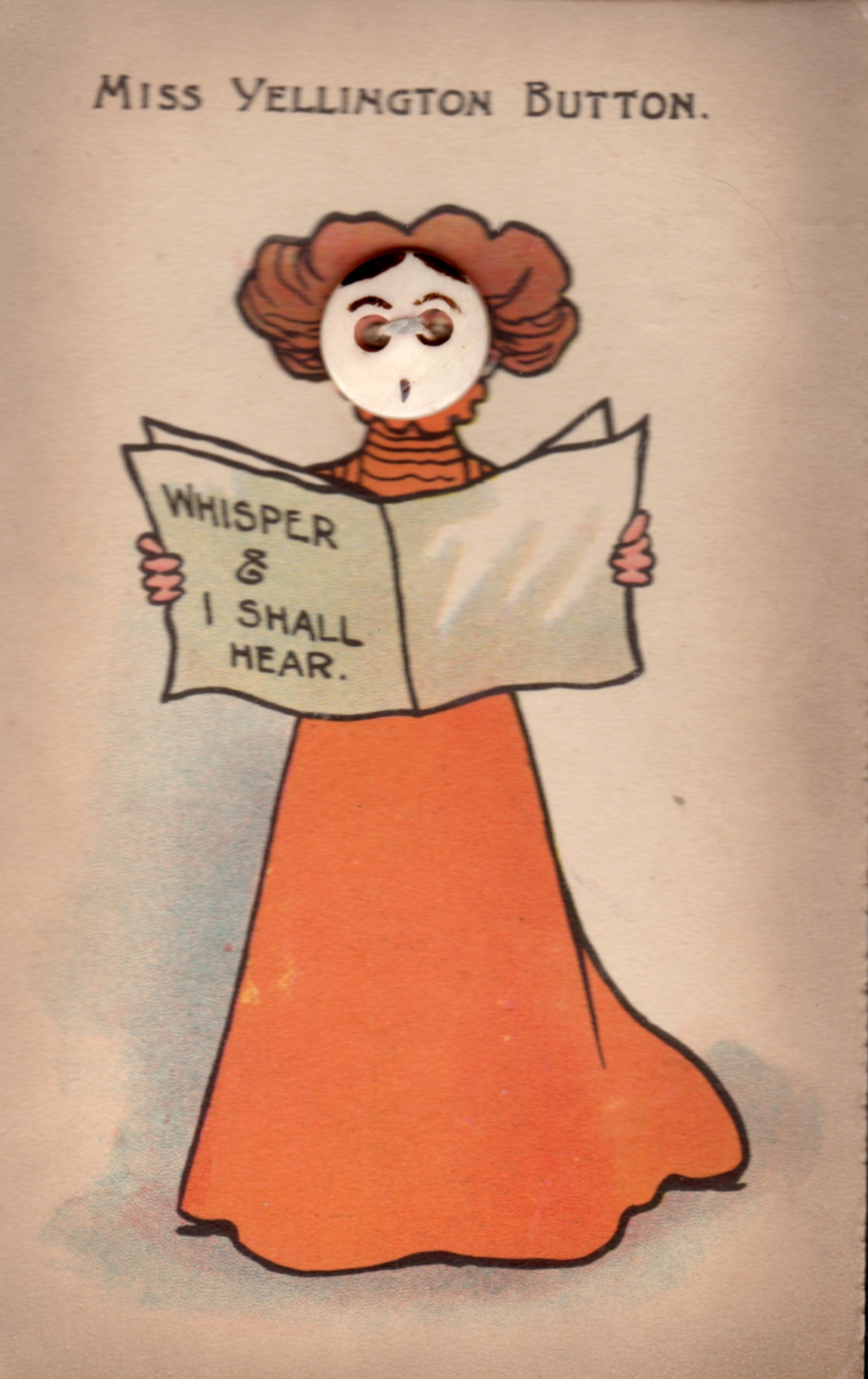 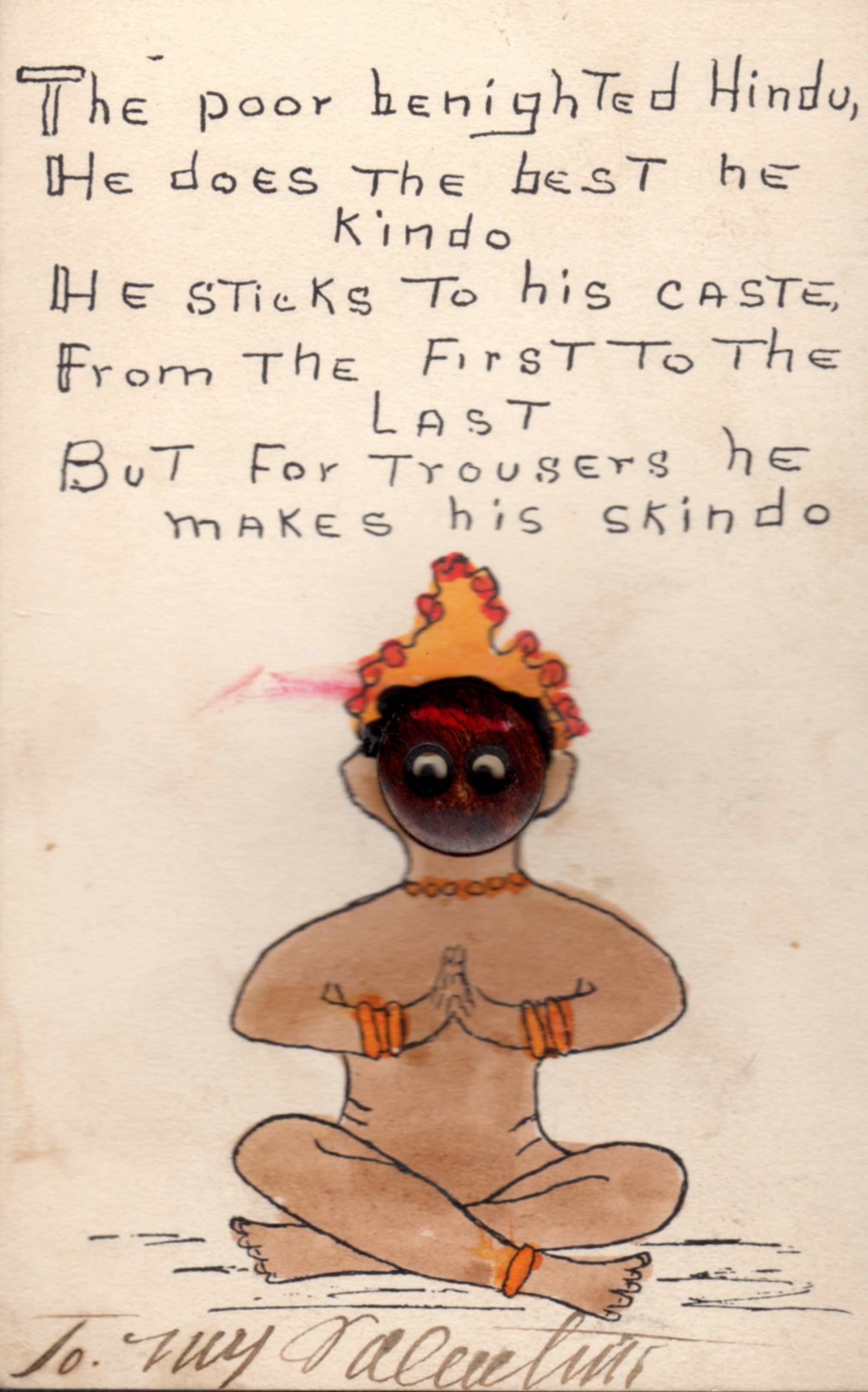 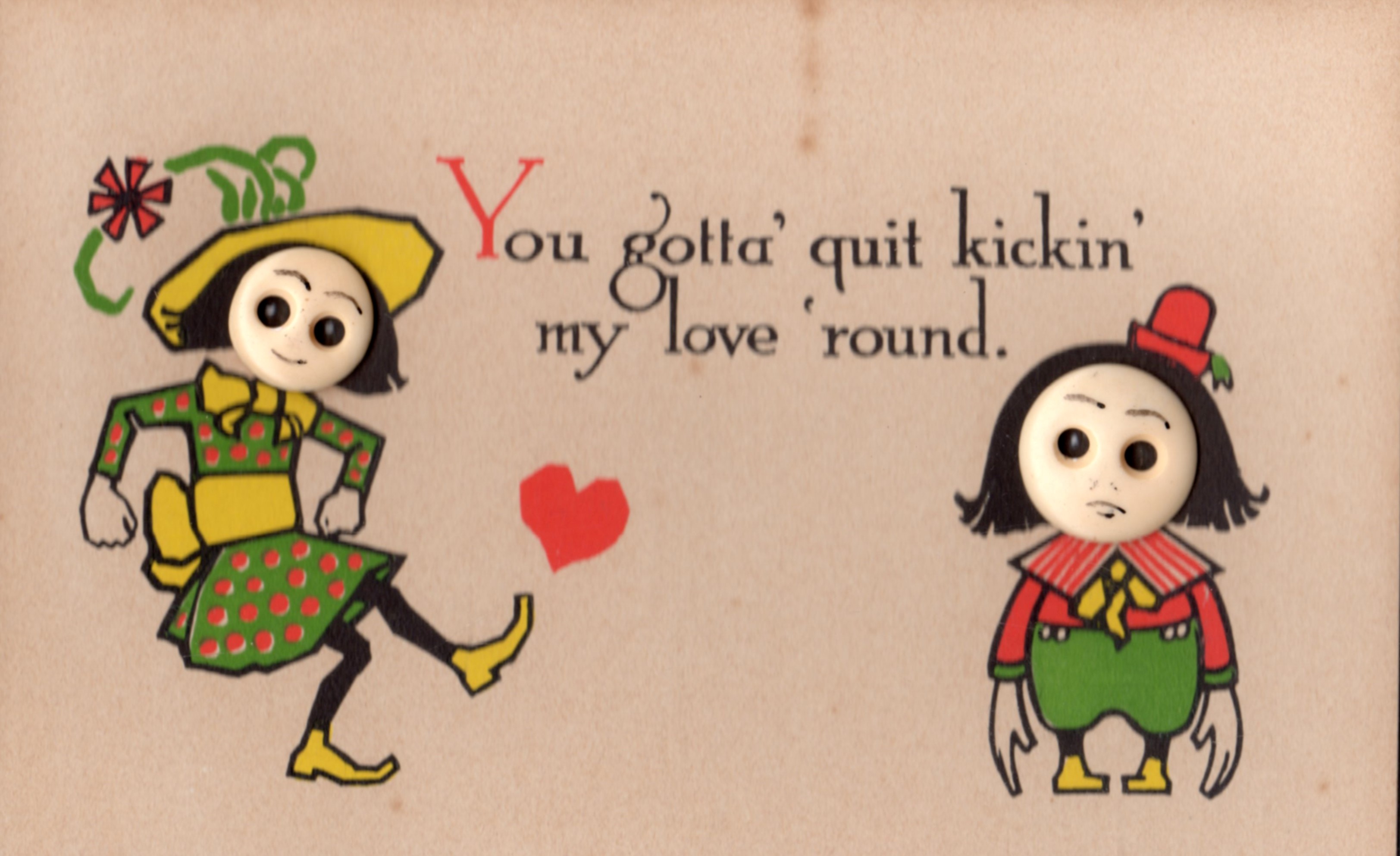 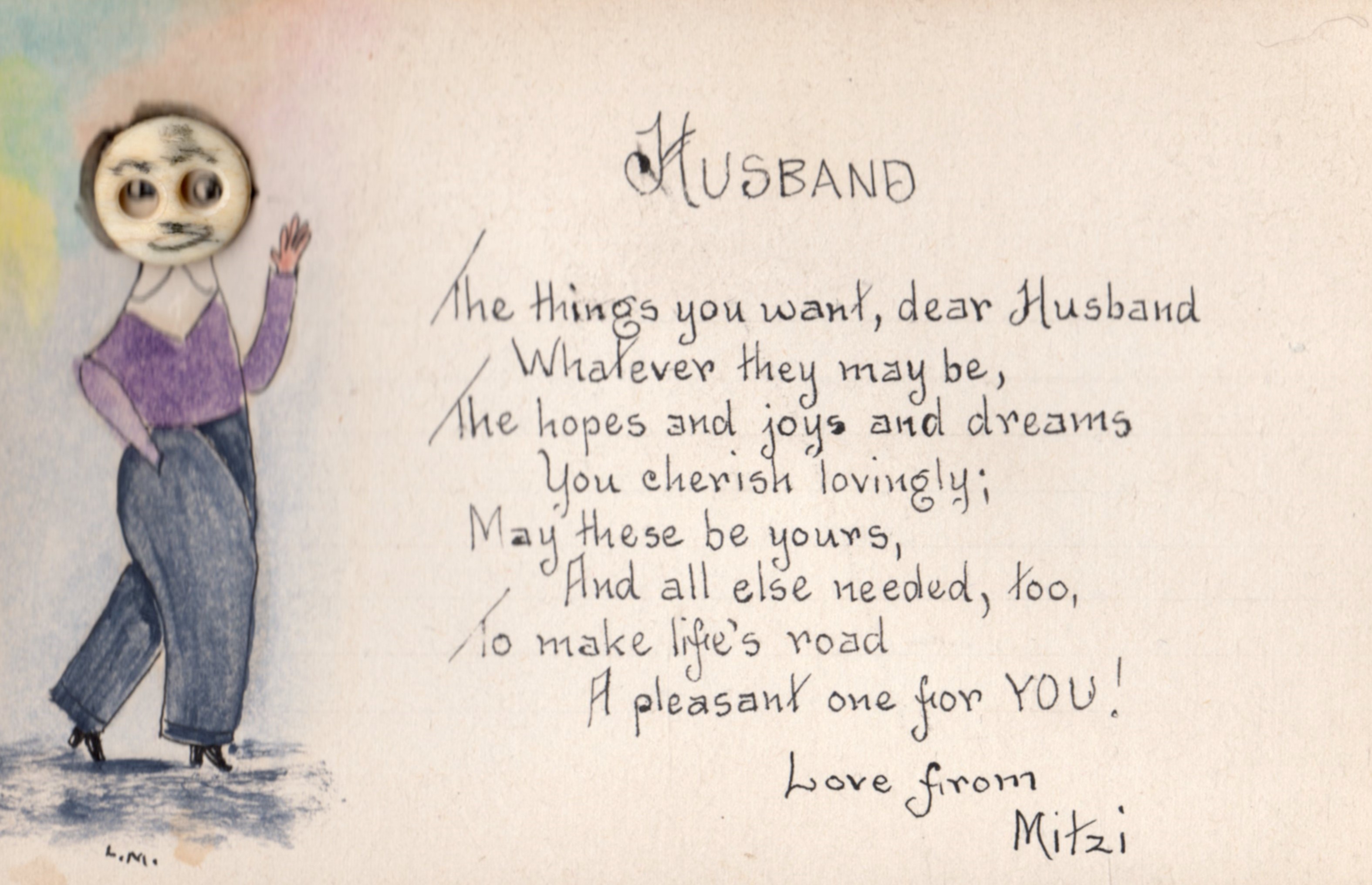