Frogs are carnivorous amphibians that extend back 265 million years ago with nearly 5000 kinds around the planet. They were a popular sight on postcards and are still seen today in such things as the Frog Prince and Kermit the frog.

As a young collector, I saw the postcard Keep Smiling, never mind the bills by Jaques Browne and couldn't resist it for meaning of life. At a time when our income was small and the bills kept coming for college and the family we were trying to raise at the same time, somehow it made me realize to just do what you can and don't worry about it. So, while this little frog looks like he is going to be eaten alive, he keeps right on smiling.

Many of the well-known postcard artists did sets of frogs on postcards. Twelvetrees did a set for National Art Publishers in 1906 with dressed frogs including the top hat, monocle Matinee Idol and the Matinee Girl. Other Twelve tree frogs are Come In, the Waters Fine, Paul and Virginia, the Groom and others.

Artist Ellam did cards for Raphael Tuck publishing for their Mixed Bathing series #9562 and the Breakfast in Bed series #9321. A great set was done by Rose Clark in 1907 for the Rotograph Co featuring many different dressed frogs, my favorite is the fireman. Others in this set include Will B Stout Frog, Lily Pad Frog, Leap frog, Prof Singer Frog, and Grandmother Bullsie.

The Frog was used in Advertising for the Frog in the Throat lozenge company in 1905. There are 12 cards in this set each one better than the next. I have always believed this group was done by Grace Drayton because I have an original of Grace Draytons with one of the girl as the image. There is an eighth card postcard set by the Newton-Rotherick Mfg Co of Chicago for Bull Frog Brand Carbon paper.

Many of the postcards feature dressed frogs but the early chromo litho postcards show us what frogs do best, sing and catch bugs. On postcards frogs were into sports and are shown riding bikes, playing tennis, and soccer. There are many postcards with the frog somewhere in the design, but the big images are the most sought after. There is even a great die cut hold to light Valentine featuring frogs playing musical instruments in the woods.

I collect the frog cards because my Grandfather loved telling the story of when I was three and helped him catch a minnow bucket of frogs for him to use to go fishing that night. When was ready to fish, he found his bucket empty. He asked me what happen to the frogs. I said, I let them out because I wanted to see them jump. He told that story for years. 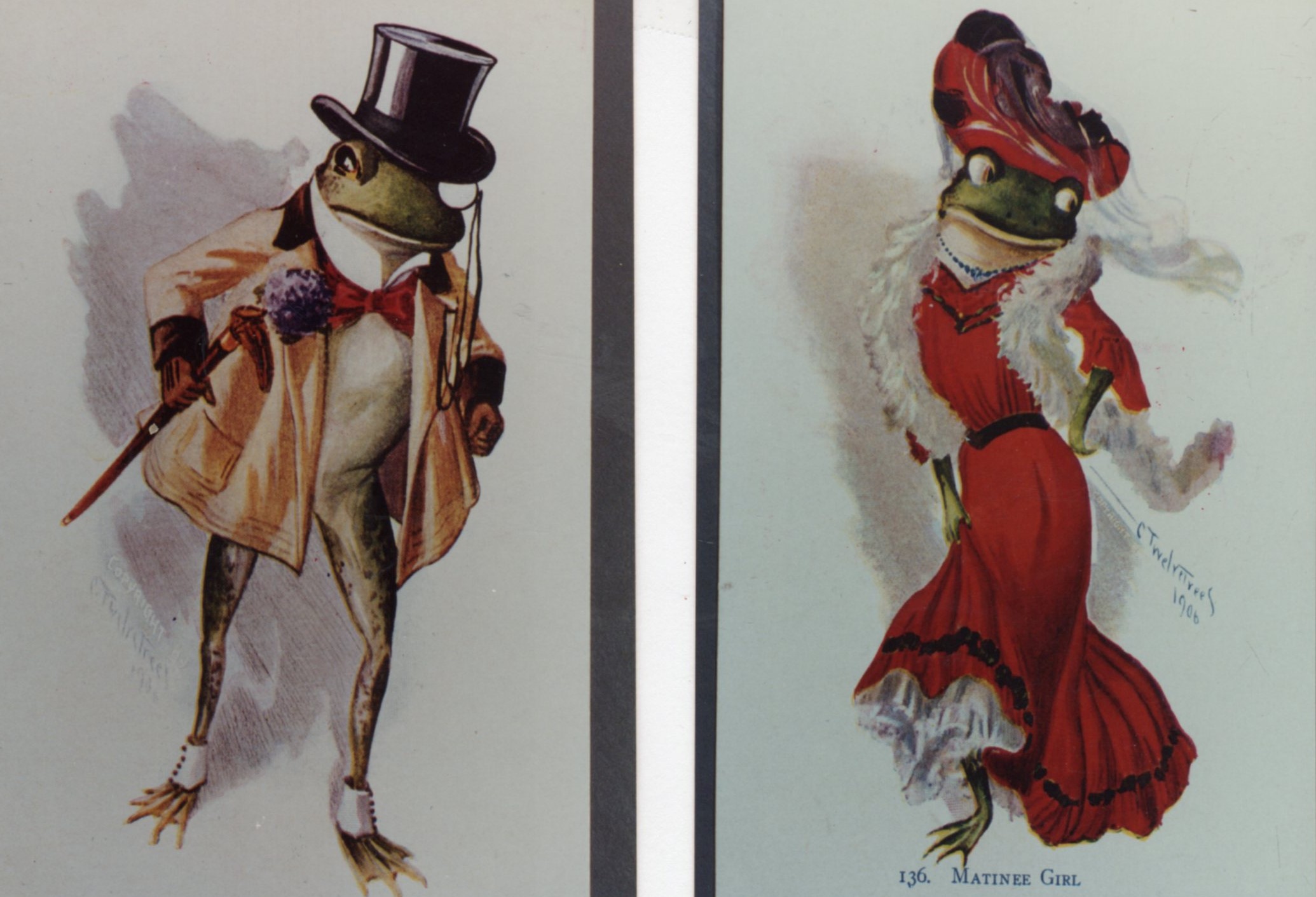 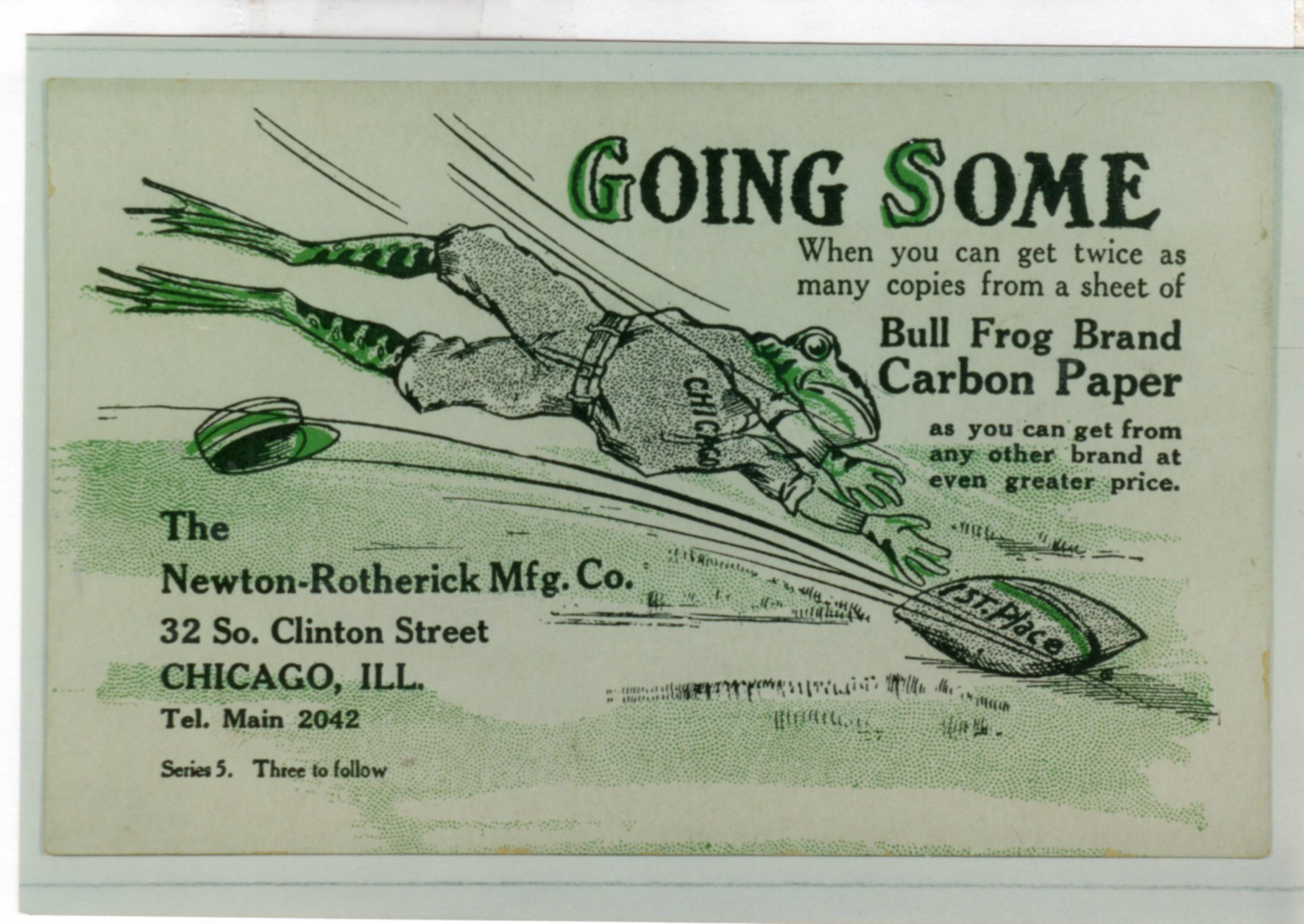 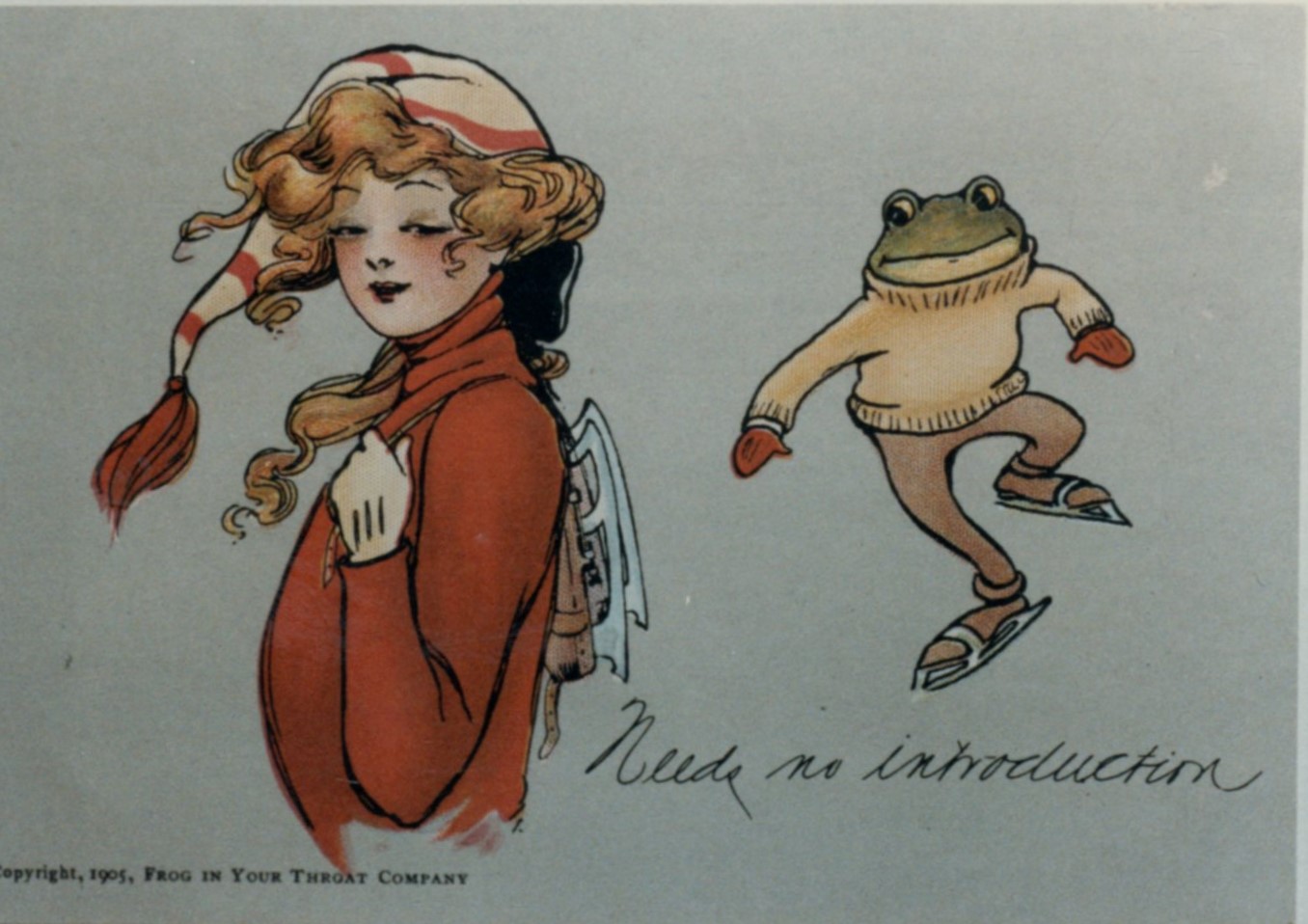 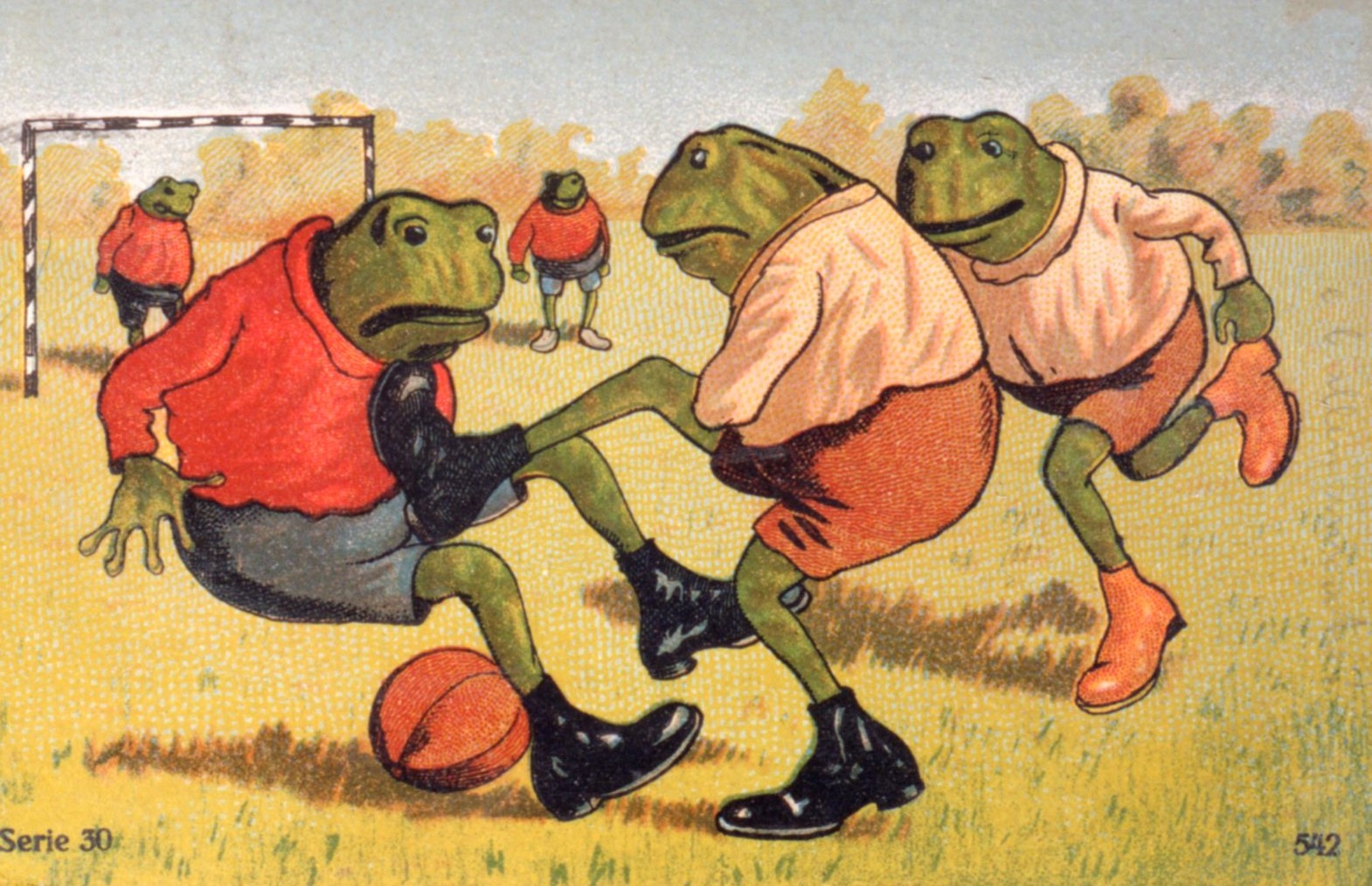 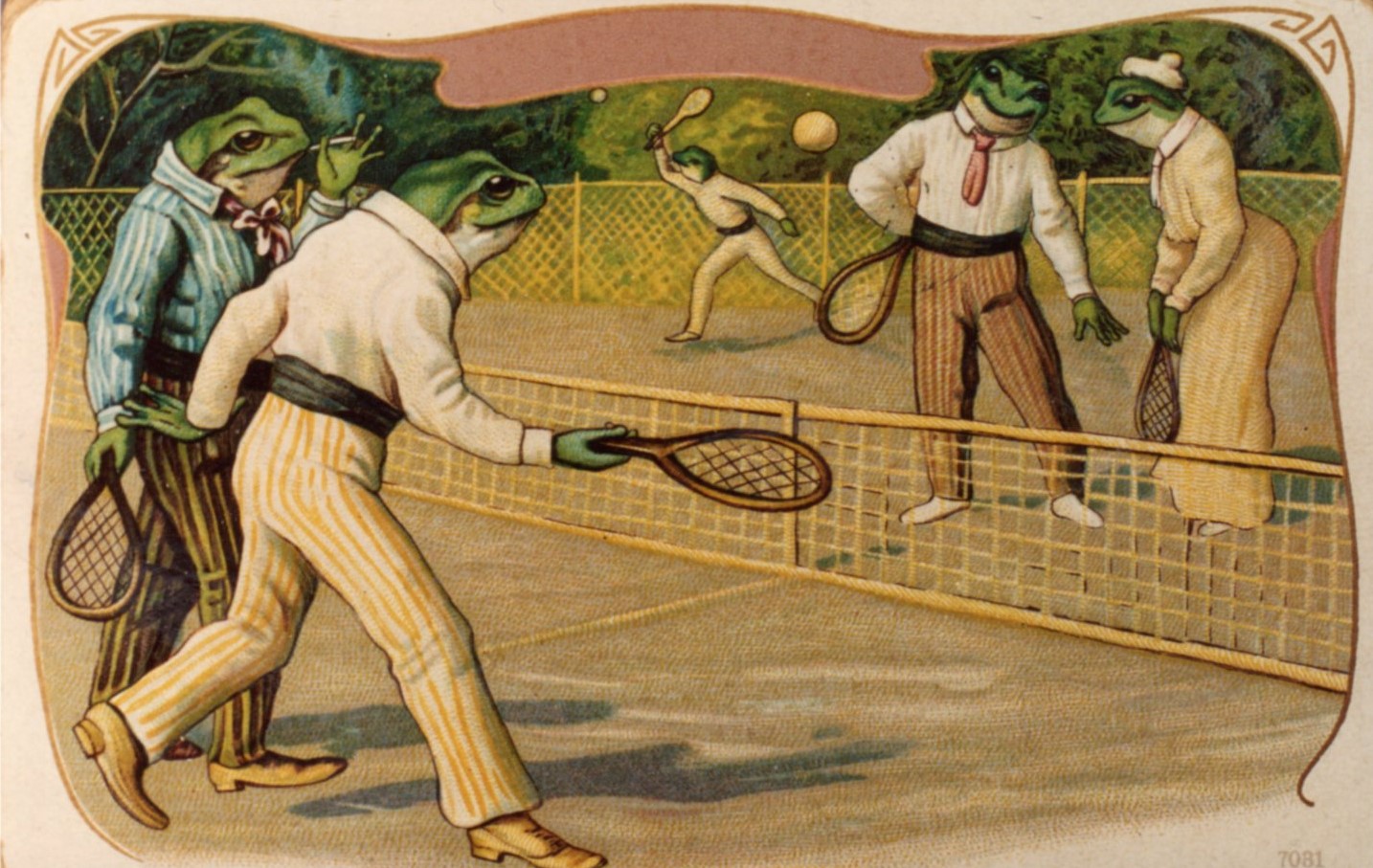 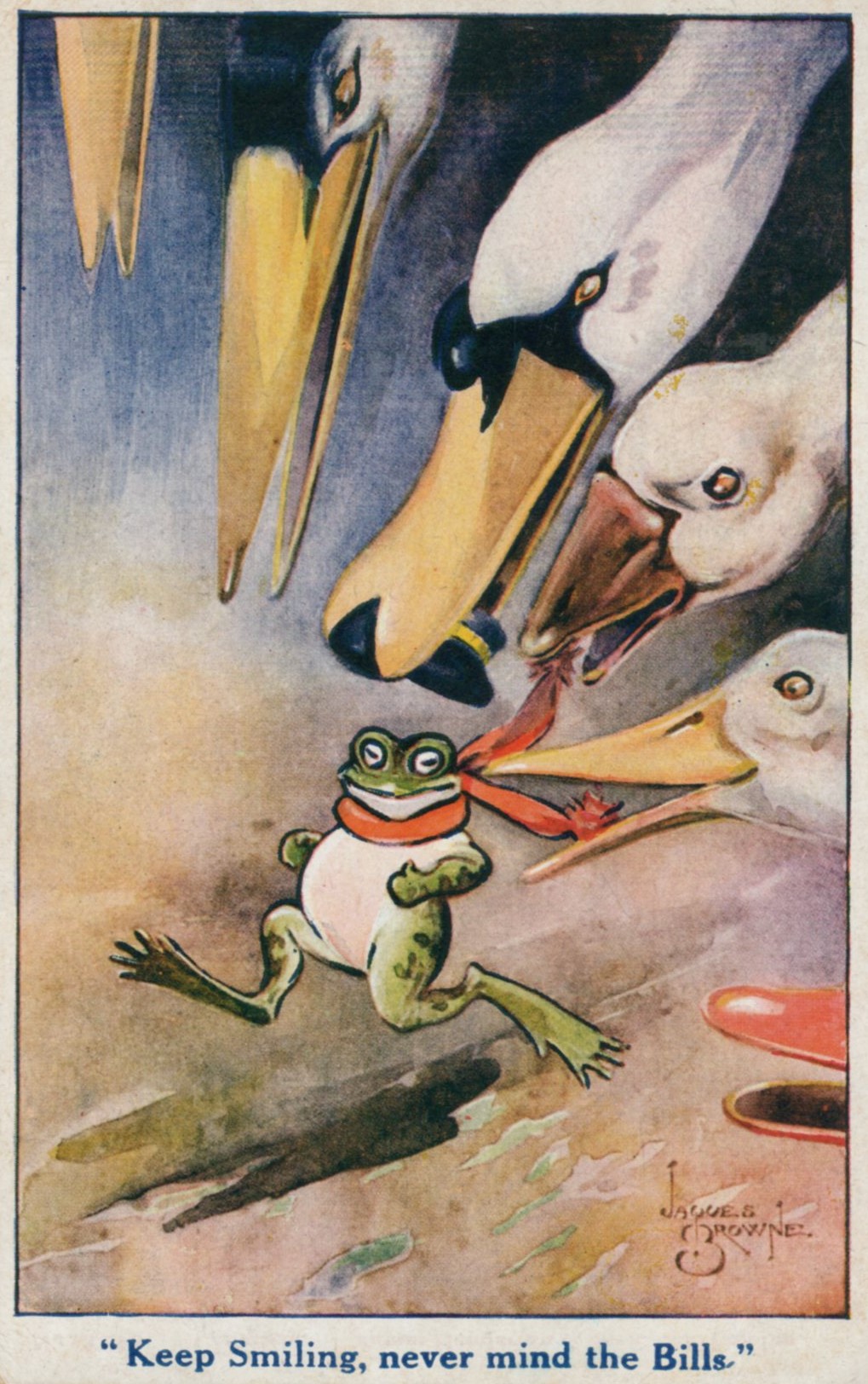 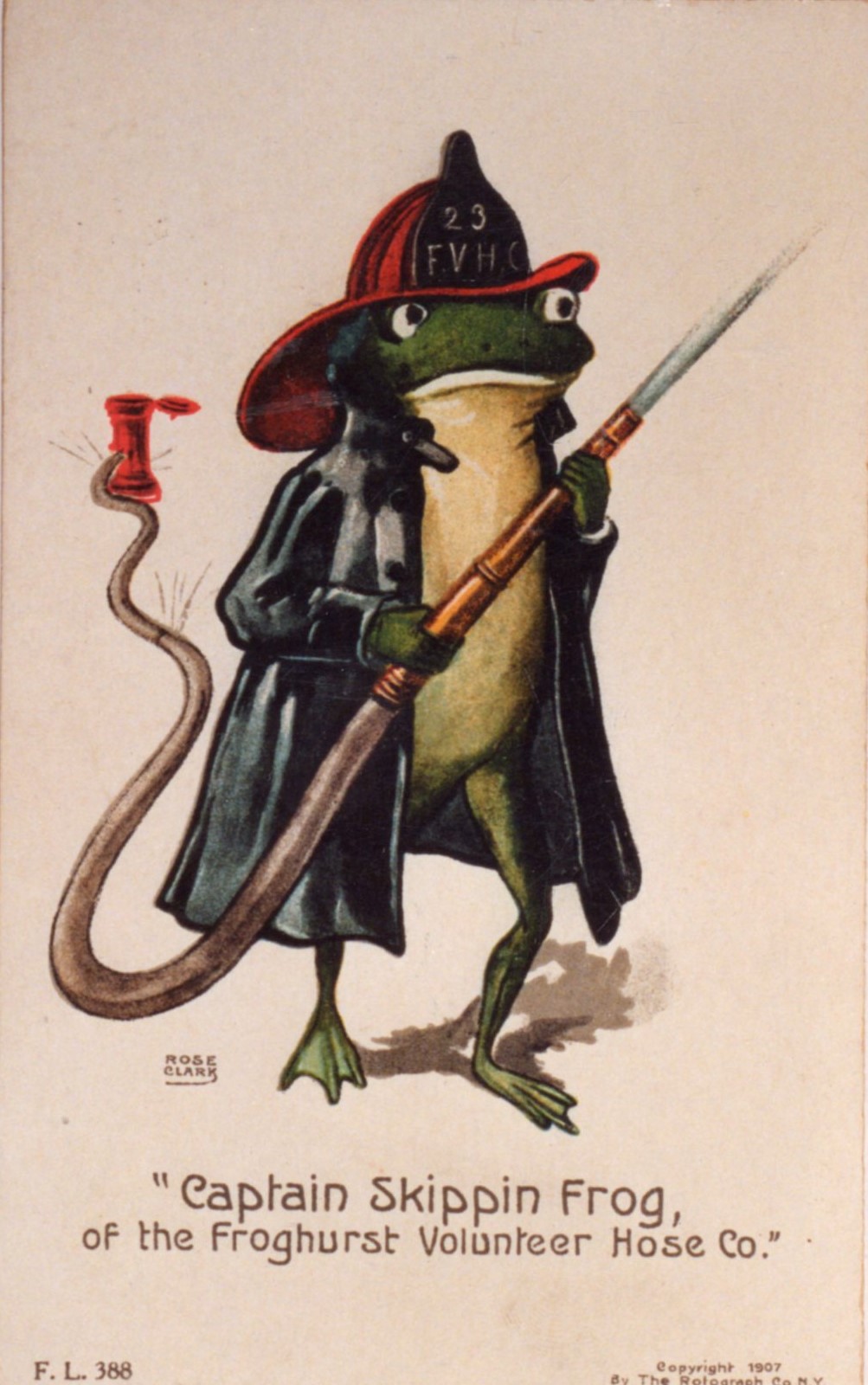 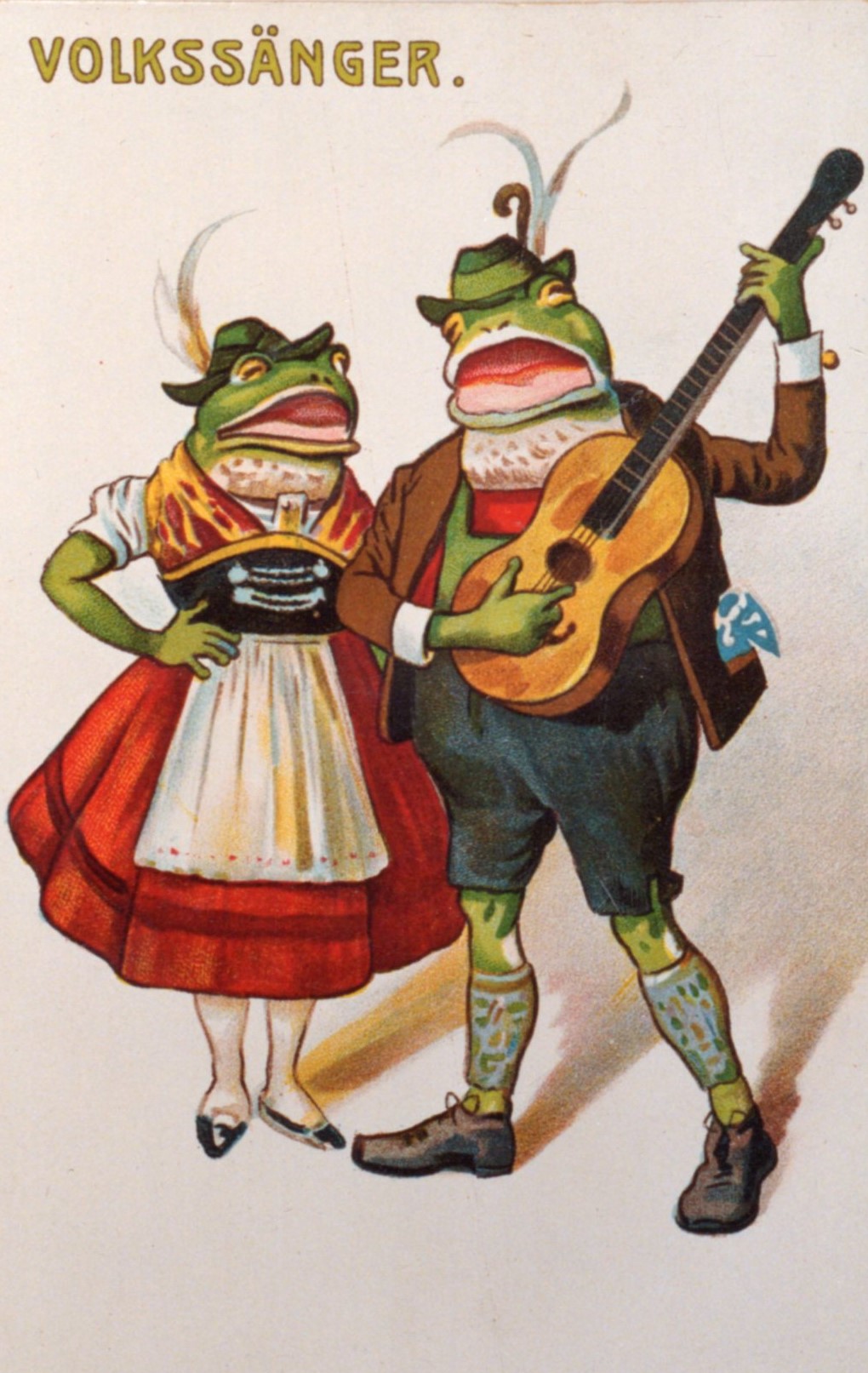 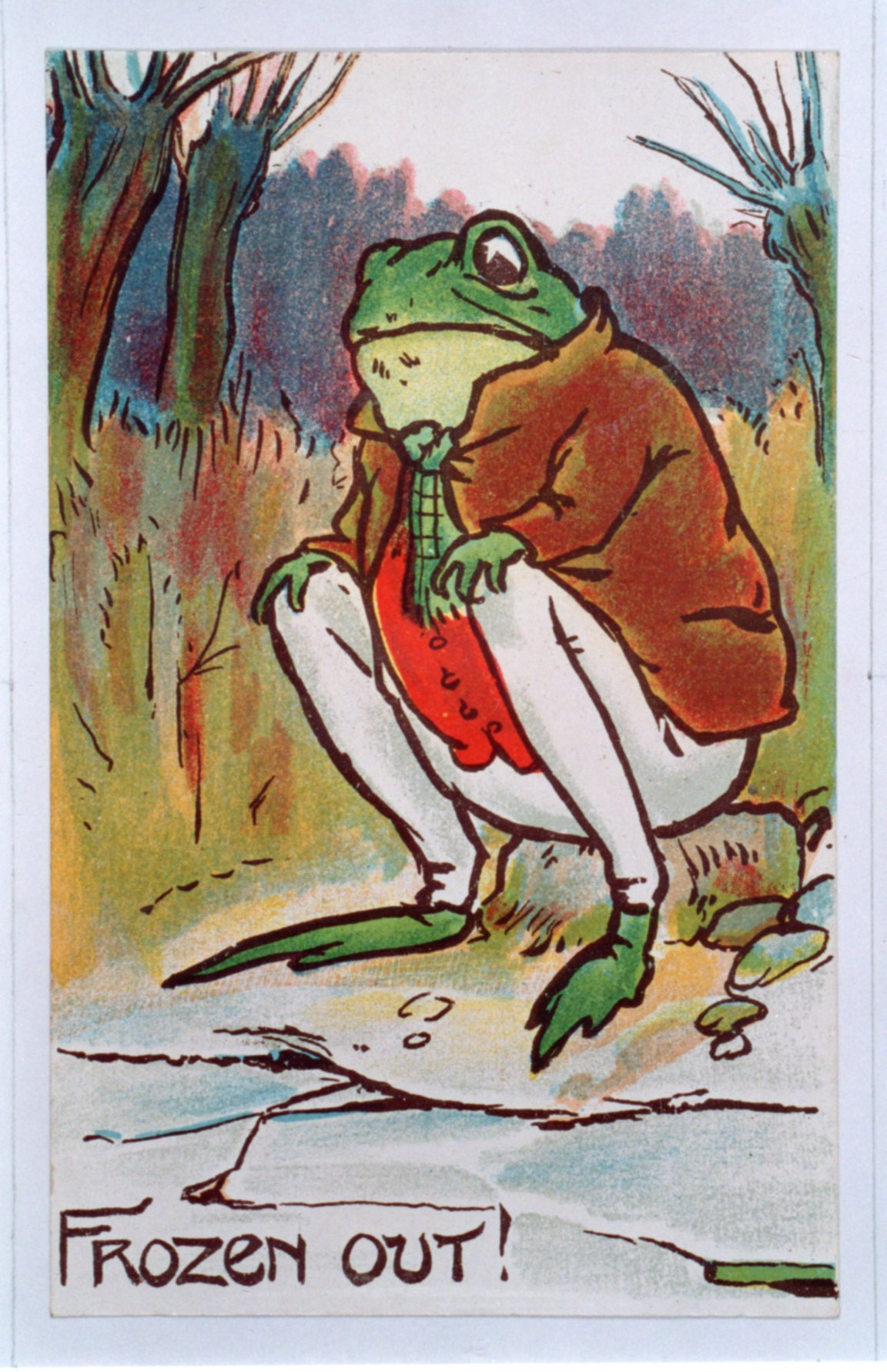 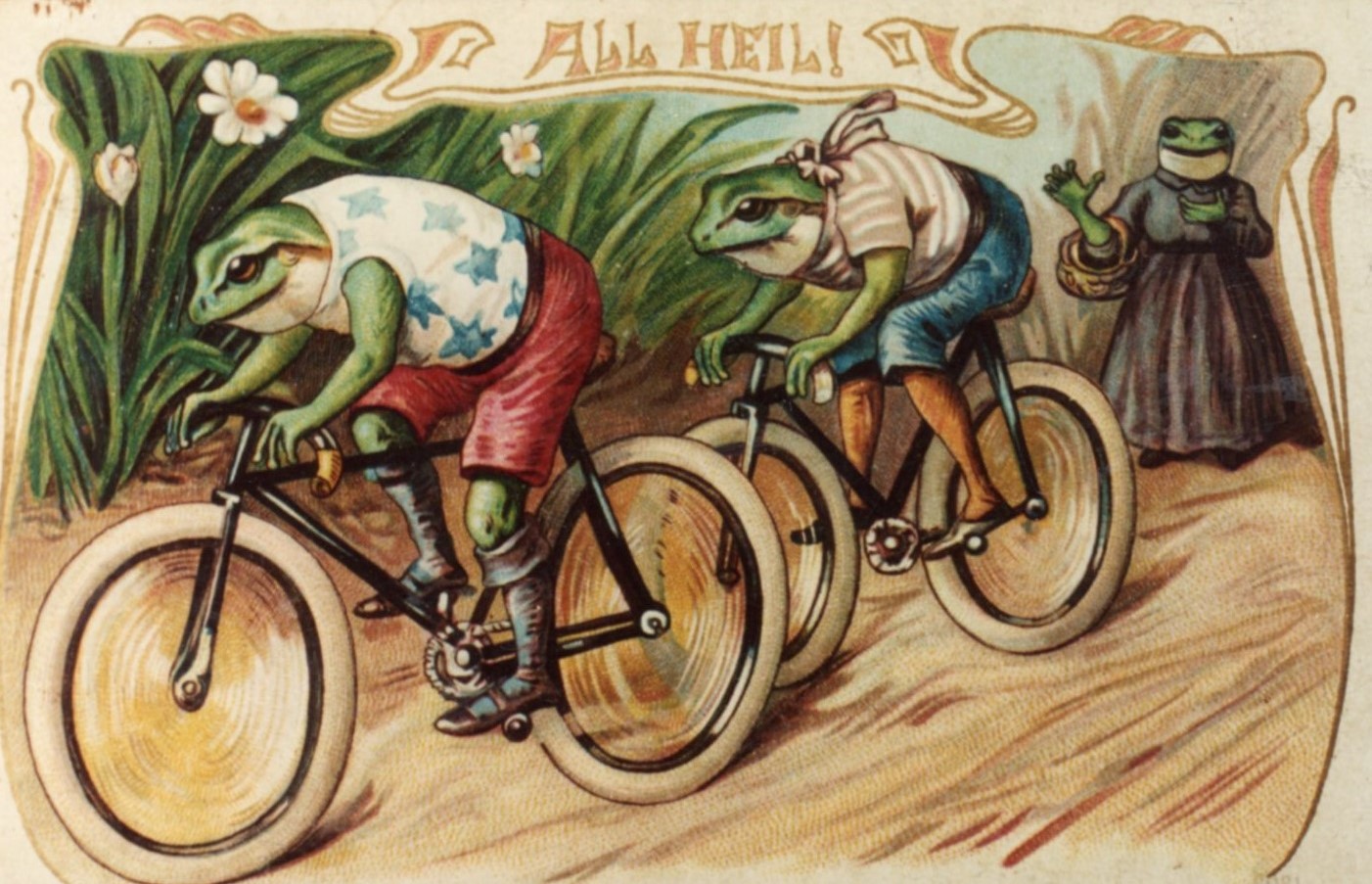 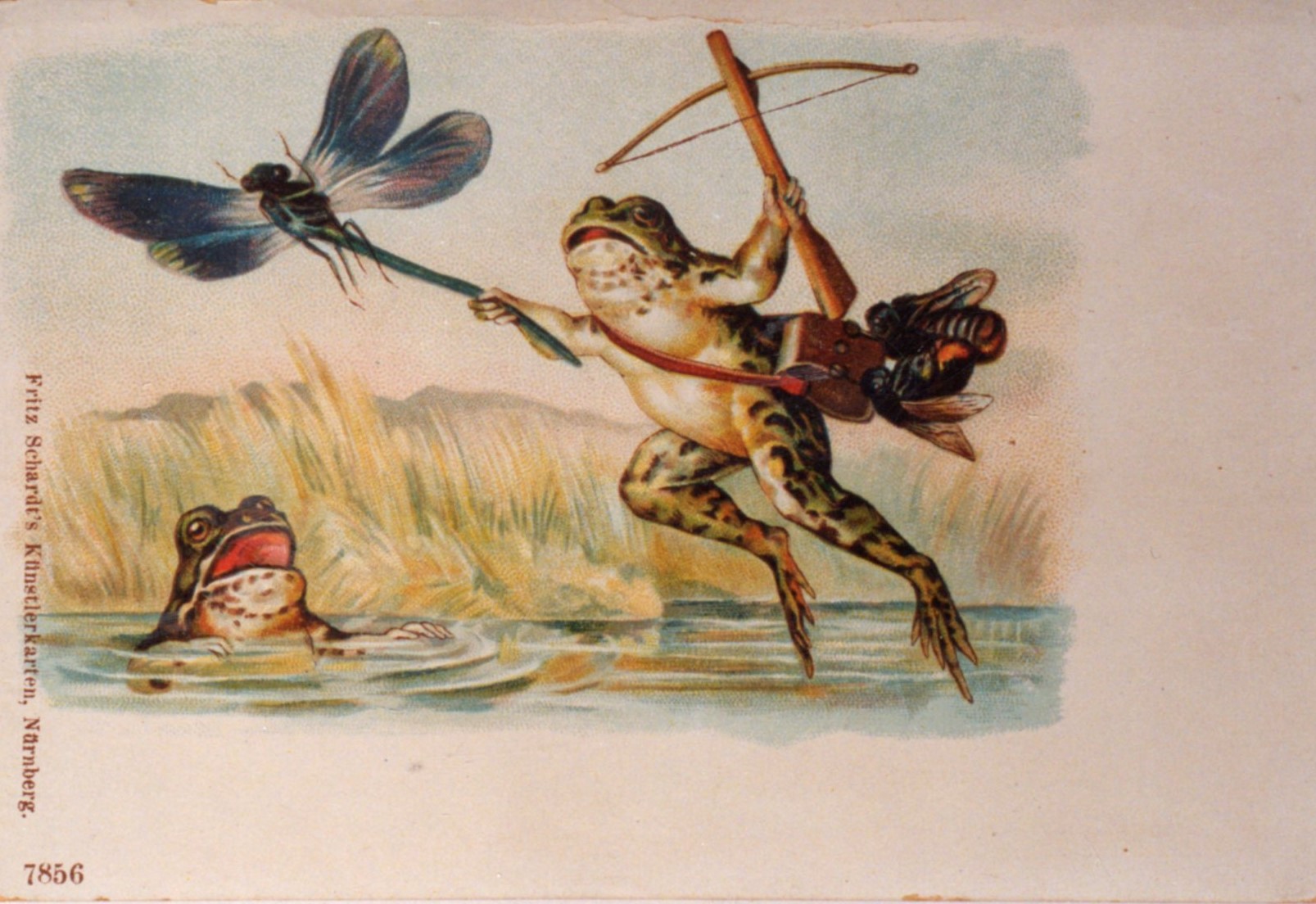